On Tuesday, 9th October 2018 , as Uganda celebrated 56 years of independence, our Vice Chancellor, Prof John Mugisha was awarded The National Independence Medal. He received this medal in recognition of his immense contribution towards the public health sector in Uganda.

Also known as the Golden Jubilee Medal, this is an award given to recognise exceptional contribution of certain civilians towards Uganda’s attainment of self-rule and those who have continued to promote independence. According to the former Chairman of the National Honours and Medals Committee, Gen. Elly Tumwine, the Medal is also given " to encourage patriotism".

On this occasion, the award was also given to several deserving individuals recognized for service in the Education and Health sectors. Alongside our Vice Chancellor, Prof John Mugisha, was Prof. Barnabas Nawangwe, VC of Makerere University. Other notable mentions are to Ms Nimisha Jayant Madhvani, Uganda's Ambassador to the United Arab Emirates; Prof. Sam Tulya-Muhika, Uganda's Ambassador to Somalia; Ms Mumtaz Kassam, Uganda's Deputy High Commissioner to the United Kingdom; Prof. Augustus Nuwagaba, a renown specialist on wealth creation and economic transformation; Mr. Robert Benon Mugabi, Rakai District LC5 chairperson; as well as Dr Robert Sebunya, Senior Advisor to the President, among others.

The event was widely covered in the media - see clippings from Uganda's leading papers, "The New Vision " and "The Daily Monitor.", page 1 & 5 respectively. 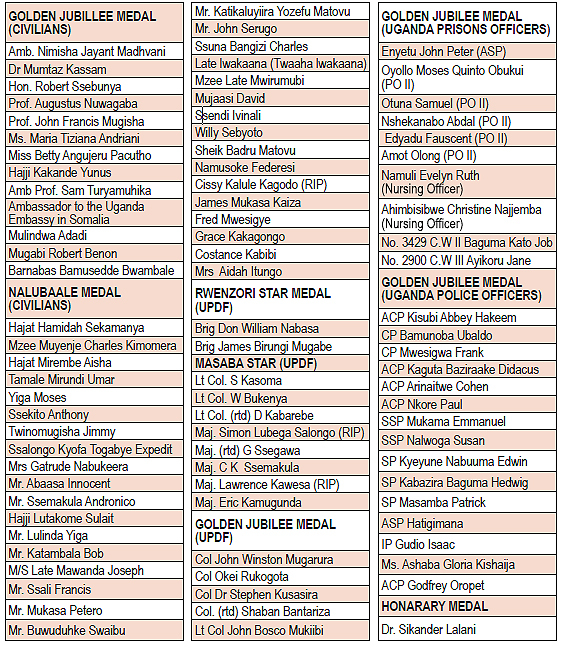